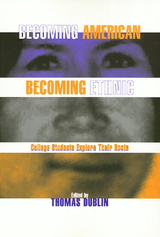 More than at any time since the 1920's the issues of immigration and ethnicity have become central to discussions of American society and identity. Becoming American, Becoming Ethnic addresses this contemporary debate, bringing together essays written over the past eighteen years by college students exploring their ethnic roots—from the experiences of their forbears to the place of ethnicity in their lives.

The students range from descendants of Europeans whose families immigrated several generations ago to Asian and Latin American immigrants of more recent decades to African-Americans and Hispanics—some have more than one ethnic heritage to grapple with, while others have migrated from one place to another within the United States. Together their voices create a dialogue about the interplay of ethnic traditions and values with American culture.

These are moving personal reflections on the continuities and changes in the ethnic experience in the United States and on the evolving meaning of ethnicity over time and across generations. Despite vocal concerns in recent years about ethnic divisiveness, these student writings show how much many young Americans share even in their differences.


In the series Critical Perspectives on the Past, edited by Susan Porter Benson, Stephen Brier, and Roy Rosenzweig.

AUTHOR BIOGRAPHY
Thomas Dublin, Professor of History at the State University of New York at Binghamton, has taught courses on immigration and ethnicity for nearly 20 years. He has published several books, most recently Immigrant Voices: New Lives in America, 1773-1986 and Transforming Women's Work: New England Lives in the Industrial Revolution.

Part I: Family Traditions
1. Life after Tercera – Virginia Coreia
2. Coming to Terms with My Heritage – Tanya Moldzinski
3. The Family History of a Fourth-Generation Pole – Sara Kindler
4. My Paternal Forebears – Michele Kitko
5. The Loss of My Family's Ethnic Ties and the Strengthening of Their American Identities – Rachel Koch
6. What's a Tyrolean? The Immigration of Mario Leonardi to America – Karen A. Gryga
7. Turetzky Family Assimilation: From Grandparents to Father to Me – Marc Turetzky
8. Changing Worlds: The Immigration Experiences of My Paternal Grandparents – Stephanie A. Courtney
9. Roots Paper – Raffi Ishkanian
10. A Family History – Bob Vaage
11. My Austrian-Italian Ethnicity – Susan Carnicelli
12. East Side Story: What West Side Story Left Out – Josephine Burgos
13. Three Generations in America – Gloria Genel
14. Where I Stand and Why – La Toya Powell

Part II: Our Parents, Ourselves
15. A Challenge of Loyalty – Lynn Sugamura
16. A Bicultural Experience – Shana R. Rivas
17. My Family History – Cecilia Pineda
18. Being an Other – Melissa Algranati
19. Discovering My Ethnic Roots – Sang-Hoon Kim
20. The Experiences of My Parents in Italy and America – Peter Bosco
21. Getting to Know My Parents So That I May Know Who I Am – Lizette Aguilar
22. Finding a Home – Ann Fenech
23. The Assimilation Problems of My Family in America – Soo Y. Kim

Part III: Ethnicity in Our Lives
24. The Oreo Cookie: Black on the Outside, White on the Inside – Cathy Thompson
25. Should I or Shouldn't I? – Jamie Dominguez
26. My Experience with Immigration/Assimilation in America – Catherine Tagudin
27. Leaving Home – Anh-Dao Nguyen
28. Being Indian in America: My Ethnic Roots and Me – Lila Shah
29. My Immigrant Experience – Vladimir Sinayuk
30. Triple Identity: My Experience as an Immigrant in America – Puwat Charukamnoetkanok
31. Two Poems – Rose Rameau