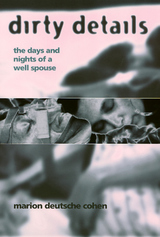 In 1977, at the age of 36, Jeffrey Cohen, a physicist at the University of Pennsylvania, was diagnosed with multiple sclerosis. But it wasn't until 10 years later that the "dirty details" began, when the disease had progressed to the point where he could not transfer himself out of his wheelchair. That point is where his wife Marion begins her memoir of caregiving: "If I had to explain it in three words, those words would be 'nights,' 'lifting,' and 'toilet.' And then, if I were permitted to elaborate further, I would continue, 'nights' does not mean lying awake in fear listening for his breathing. 'Lifting' does not mean dragging him by the feet along the floor. And 'toilet' does not mean changing catheters."

But "dirty details," Marion Cohen teaches us, involves more than "nights," "lifting," and "toilet." There is the loss, anger, fear, and desperation that envelops the family. She reveals what it felt like to be consistently in "dire straits" with no real help or understanding, what she characterizes as society's "conspiracy of silence." Chronicling their lives in the context of her husband's progressing disease, she discusses the raging emotions, the celebrations, the day-to-day routine, the arguments, the disappointments, and the moments of closeness. During the 15 years she cared for him at home, both continued to work on various projects, share in the rearing of their four children, and be very much in love. This powerful, honest narrative also delves into the process of making the "nursing-home decision" and those decisions Cohen made to put her and her family's life together again.

AUTHOR BIOGRAPHY
Marion Deutsche Cohen is actively involved in the Well Spouse community and has published many poems and articles on the subject and on home schooling that have appeared in such publications as the American Poetry Review, Disability Rag, and Mothering. She currently teaches mathematics at Temple University.

Foreword – Marty Wyngaarden Krauss
Preface
1. The Trike and the 49 Bus
2. Nights, Lifting, and Toilet: The First Conspiracy of Silence
3. Dire Straits
4. Scared
5. Too Many Variables: Relationships within the Household
6. A Separate Species: Relationships with the World and with Ourselves
7. Preparing for His Ghost: About Loss
8. Where Do We Stand? The Second Conspiracy of Silence
Resources
Photo Gallery