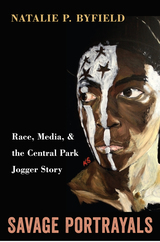 In 1989, the rape and beating of a white female jogger in Central Park made international headlines. Many accounts reported the incident as an example of “wilding”—episodes of poor, minority youths roaming the streets looking for trouble. Police intent on immediate justice for the victim coerced five African-American and Latino boys to plead guilty. The teenage boys were quickly convicted and imprisoned. Natalie Byfield, who covered the case for the New York Daily News, now revisits the story of the Central Park Five from her perspective as a black female reporter in Savage Portrayals.

Byfield illuminates the race, class, and gender bias in the massive media coverage of the crime and the prosecution of the now-exonerated defendants. Her sociological analysis and first-person account persuasively argue that the racialized reportage of the case buttressed efforts to try juveniles as adults across the nation.

Savage Portrayals casts new light on this famous crime and its far-reaching consequences for the wrongly accused and the justice system.
AUTHOR BIOGRAPHY
Natalie P. Byfield is an Assistant Professor of Sociology at St. John's University in Queens, New York. She has also taught in Journalism and Media Studies. She is a former Staff Writer for the New York Daily News.
TABLE OF CONTENTS


Acknowledgments
1    Reconnecting New Forms of Inequality to their Roots
2    A Jogger Is Raped in Central Park
3    The Position of the Black Man in the Cult of White Womanhood
4    Salvaging the “Savage”: A Racial Frame that Refuses to Die
5    A Participant Observes How Content Emerges
6    The “Facts” Emerge to Convict the Innocent
7    The Case Falls Apart: Media’s Brief Mea Culpa
8    Selling Savage Portrayals: Young Black and Latino Males in the Carceral State
9    They Didn’t Do It!
Notes
References
Index