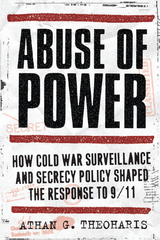 Athan Theoharis, long a respected authority on surveillance and secrecy, established his reputation for meticulous scholarship with his work on the loyalty security program developed under Truman and McCarthy. In Abuse of Power, Theoharis continues his investigation of U.S. government surveillance and historicizes the 9/11 response.

Passionately argued, this timely book speaks to the costs and consequences of still-secret post-9/11 surveillance programs and counterintelligence failures. Ultimately, Abuse of Power makes the case that the abusive surveillance policies of the Cold War years were repeated in the government's responses to the September 11 attacks.

Athan Theoharis is Emeritus Professor of History at Marquette University and author of twenty books, including The Boss: J. Edgar Hoover and the Great American Inquisition and Chasing Spies: How the FBI Failed in Counterintelligence But Promoted the Politics of McCarthyism.


2. A History of FBI Wiretapping Authority


3. The Politics of Wiretapping


4. A Commitment to Secrecy


5. The Limits of Counterintelligence


6. The Politics of Counterintelligence


7. Ignoring the Lessons of the Cold War