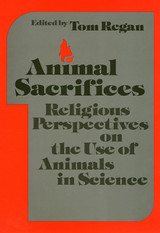 The issues of animal rights and the use of animals in scientific experimentation are fraught with controversy. In an effort to define the bases of such strong emotional response towards an ethical issue, this book presents the teachings of the major religions of the world concerning animals and, more specifically, their use in science. Judaism, Christianity, Islam, Hinduism, Jainism, Buddhism, and Confucianism are represented in this collection of eight essays by religious authorities.

Scriptural writings, written and oral tradition, law, religious parables, and even folklore are used to illustrate the position of each religion on this question. When there are no specific teachings regarding the relatively recent use of animals in scientific research, conclusions are derived from the view of man’s relations with the rest of the world.

In addition to the essays dealing with specific religions, there is also a chapter detailing recent uses of animals in scientific research throughout the world. It is estimated that 500 million animals a year are sacrificed to science. This volume attempts to find out for what purposes they are used, under what conditions, and with what legal protection.

Based on a conference which explored the views of religion toward scientific experimentation on animals, this collection of essays addresses an explosive issue from a number of different perspectives. Animal Sacrifices is a fair-minded and informative discussion of a contemporary ethical dilemma.

AUTHOR BIOGRAPHY
Tom Regan, Professor of Philosophy at North Carolina State University is the author of Bloomsbury’s Prophet: G. E. Moore and the Development of His Moral Philosophy, and the editor of Health Care Ethics (with Donald VanDeVeer), G. E. Moore: The Early Essays, Just Business, Earthbound, and Matters of Life and Death (all published by Temple).
TABLE OF CONTENTS
Contents
Preface
1. Introduction: Religions and the Rights of Animals / John Bowker
2. The Use of Animals in Science / Sidney Gendin
3. Judaism and Animal Experimentation / Rabbi Dr. J. David Bleich
4. The Place of Animals in Creation: A Christian View / Andrew Linzey
5. The Relevance of Animal Experimentation to Roman Catholic Ethical Methodology / James Gaffney
6. Animal Experimentation: The Muslim Viewpoint / Al-Hafiz B. A. Masri
7. Hindu Perspectives on the Use of Animals in Science / Basant K. Lal
8. Noninjury to Animals: Jaina and Buddhist Perspectives / Christopher Chapple
9. Of Animals and Man: The Confucian Perspective / Rodney L. Taylor
About the Authors
REQUEST ACCESSIBLE FILE