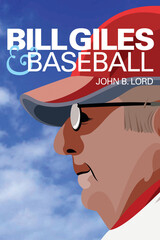 Bill Giles oversaw one of the greatest eras of winning that the Philadelphia Phillies ever enjoyed. In Bill Giles and Baseball, John Lord chronicles Giles' remarkable career--which includes 44 years with the Phillies--to provide an insider's view of the business of the sport, which takes place off the field.

Based on extensive interviews, Bill Giles and Baseball spans Giles' life from his childhood growing up in the game to the tumultuous years he spent as the president and managing partner of the Phillies. Purchasing the team in 1981, when baseball experienced its first serious labor stoppages, Giles also watched baseball add franchises, grapple with franchise fees, realign the leagues, and restructure baseball's postseason. Yet Giles, the public face of the Phillies championship teams of 1980, 1983, and 1993, is best remembered for his critical role in creating innovative TV deals, and leading the efforts to build the Phillies' beautiful new ballpark.

A book about the business of baseball as seen through the eyes of one of the architects of the game, Bill Giles and Baseball captures the spectacle of the sport through fascinating behind-the-scenes stories of our national pastime.

John B. Lord is Professor of Marketing and Director of Sports Marketing at Saint Joseph's University.  He is the co-editor (with Aaron L. Brody) of Developing New Food Products for a Changing Marketplace and contributor to Strategic Management: A Cross Functional Approach.


Acknowledgments
Introduction
1 A Rapid-Fire Exposition of the Business of Baseball from the Beginning to 1981
2 Bill Giles and Major League Baseball’s Network  TV Deals, 1983–1995
3 Collusion
4 The Rise and Fall of Fay Vincent
5 Era of Unrest: The Strike of 1994 and the 1996 Collective Bargaining Agreement
6 Expansion, Realignment, and Interleague Play: Bringing Baseball into the 1990s
7 The Evolution of Baseball’s Governance System
8 Toward a New Era of Labor Peace: The 2002 Collective Bargaining Agreement
9 Bill Giles and His Baseball Team
10 Bill Giles and His Ballparks
11 From the Depths of 2002 to the Heights of 2012: Nine Reasons Why Baseball Is Booming
Notes
Bibliography
Index