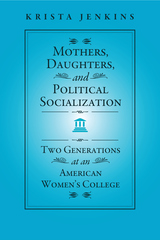 Mothers, Daughters, and Political Socialization examines the role of intergenerational transmission—the maternal influences on younger women—while also looking at differences among women in attitudes and behaviors relative to gender roles that might be attributed to the nature of the times during their formative years. How do daughters coming of age in an era when the women's movement is far less visible deal with gendered expectations compared to their mothers? Do they accept the contemporary status quo their feminist mothers fought so hard to achieve? Or, do they press forward with new goals?

Jenkins shows how contemporary women are socialized to accept or reject traditional gender roles that serve to undermine their equality.