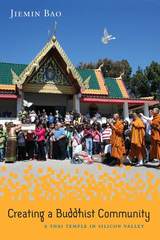 The Wat Thai Buddhist Temple in Silicon Valley was founded in 1983 by a group of predominantly middle-class men and women with different ethnic and racial identities. The temple, which functions as a religious, social, economic, educational, and cultural hub, has become a place for the community members to engage in spiritual and cultural practices.

Bao’s detailed account of the process of creating an inclusive temple community with Thai immigrants as the majority helps to deconstruct the exoticized view of Buddhism in American culture. Creating a Buddhist Community also explores Wat Thai’s identification with both the United States and Thailand and how this transnational perspective reimagines and reterritorializes what is called American Buddhism.
AUTHOR BIOGRAPHY
Jiemin Bao is Professor of Anthropology at the University of Nevada, Las Vegas, and the author of Marital Acts: Gender, Sexuality, and Identity among the Chinese Thai Diaspora.
TABLE OF CONTENTS