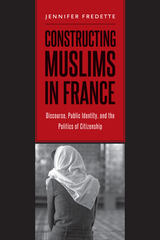 The standing of French Muslims is undercut by a predominant and persistent elite public discourse that frames Muslims as failed and incomplete French citizens. This situation fosters the very separations, exclusions, and hierarchies it claims to deplore as Muslims face discrimination in education, housing, and employment.

In Constructing Muslims in France, Jennifer Fredette provides a deft empirical analysis to show the political diversity and complicated identity politics of this relatively new population. She examines the public identity of French Muslims and evaluates images in popular media to show how stereotyped notions of racial and religious differences pervade French public discourse. While rights may be a sine qua non for fighting legal and political inequality, Fredette shows that additional tools such as media access are needed to combat social inequality, particularly when it comes in the form of unfavorable discursive frames and public disrespect.

Presenting the conflicting views of French national identity, Fredette shows how Muslims strive to gain recognition of their diverse views and backgrounds and find full equality as French citizens.
AUTHOR BIOGRAPHY
Jennifer Fredette is Professor of Public Law at North Central College in Naperville, IL. She is the translator of Sylvain Brouard and Vincent Tiberj's As French As Everyone Else? A Survey of French Citizens of Maghrebin, African, and Turkish Origin (Temple).
TABLE OF CONTENTS


Acknowledgments
Abbreviations
1  Introduction: Why Do We Ask Whether Muslims Can Be French?
2  Elusive Citizenship: The Consequences of an Undesirable Public Identity
3  Claiming Membership: French Muslim Identities, Political Goals, and Repertoires of Contention
4  Education: The (Undelivered?) Promise of Republican Equality
5  Employment: The Muslim Experience in (and out of) the Workplace
6  Housing: The Banlieues as a Geographic and Socially Constructed Place
7  The Contentious Concept of Frenchness: French Muslims Embracing, Reimagining, but Not Rejecting the Republican Triad
Appendix: Sample Questionnaire
Notes
References
Index