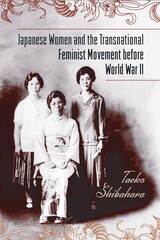 This book traces the development of feminist consciousness in Japan from 1871 to 1941. Taeko Shibahara uncovers some fascinating histories as she examines how middle-class women navigated between domestic and international influences to form ideologies and strategies for reform. They negotiated a humanitarian space as Japan expanded its nationalist, militarist, imperialist, and patriarchal power.

Focusing on these women's political awakening and activism, Shibahara shows how Japanese feminists channeled and adapted ideas selected from international movements and from interactions with mainly American social activists.

Japanese Women and the Transnational Feminist Movement before World War II also connects the development of international contacts with the particular contributions of Ichikawa Fusae to the suffrage movement, Ishimoto Shidzue to the birth control movement, and Gauntlett Tsune to the peace movement by touching on issues of poverty, prostitution, and temperance. The result provides a window through which to view the Japanese women's rights movement with a broader perspective.

Taeko Shibahara is an independent scholar who teaches part time at Doshisha University and Ryukoku University. She is a co-translator of Ellen Carol DuBois and Lynn Dumenil's Through Women's Eyes: An American History with Documents.


Acknowledgments
Abbreviations
Chronology
Introduction
1  Laying the Foundations for an International Feminist Perspective: Challenging the Discourses of Civilization
Women’s Situation in Modernizing Japan
Christian Social Activism and the Notion of the Women’s Rights Movement
Social Questions and Socialist Women
2  “Carrying with Her New Ideals and a New Outlook”: The Development of Cross-cultural Contacts, 1902–1930
Awakening International Feminist Discourse and the IWSA, 1902–1920
Different Perceptions about Women’s Roles in Society: The IWSA Dialogue with Japanese Educators
Propagating Western Knowledge about Women’s Social Activism in the 1910s
The Problem of Unity in the Women’s Rights Movement in Early 1920s Japan
From Social Reform Work to the Unified Suffrage Movement
The First Pan-Pacific Women’s Conference in Honolulu in 1928
3  Generating a Feminist Movement through Peace Activism, 1915–1941
No Peace without Equality
The Buildup to the Foundation of the Women’s Peace Association in Japan
In Japanese Women’s Own Image
Women Pacifists in International Politics
Expanding Spaces for Peace Activism
Combining a Nuanced Strategy with a Middle Way
4  From Private to Public: Ishimoto Shidzue and the Birth Control Movement up to 1941
Ishimoto Shidzue and the Development of Feminist Consciousness
Ishimoto’s Encounter with the Discourse of the Birth Control Movement
From the Private to the Public
Ishimoto Shidzue in America, 1924
Linking Birth Control with Suffrage
Broadening Feminist Consciousness
5  Using Their Initiative at Home and Beyond: Suffragists’  Wartime Activism, 1931–1941
The Women’s Rights Movement in the Aftermath of the Manchurian Incident
Women’s Initiative in Wartime Social Activism during the Second Sino-Japanese War
Writing for Japanese Women
The Gap between American and Japanese Women Widens
The Suspension of Suffragist Activism
Conclusion
Epilogue: Postwar Continuity
Appendix A: Notable People
Appendix B: Notable Organizations
Notes
Bibliography
Index