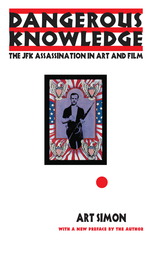 Fifty years ago, the assassination of John F. Kennedy shocked the world and focused attention to the 8mm footage shot by Abraham Zapruder. The event fueled conspiracy theories and repeated viewings of Zapruder's film as seemingly everyone in the world searched for motive and conclusive proof of a single gunman.

In his new Preface to this edition of Dangerous Knowledge, Art Simon discusses public fascination with celebrity deaths and recent assassination-related media-from documentaries to scholarly books to the scandalous video game JFK Reloaded-to show that the assassination continues to inspire writers, artists, and filmmakers.

Dangerous Knowledge examines the seminal works of art associated with the assassination, including Andy Warhol's silk screens, the underground films of Bruce Conner, and provocative Hollywood films like The Parallax View and JFK.  Simon's investigation places assassination art and images within a historical context-one that helps us understand what the assassination has meant to American culture.
AUTHOR BIOGRAPHY
Art Simon is Associate Professor of Film Studies in the English Department at Montclair State University and is co-editor (with Cynthia Lucia and Roy Grundmann) of The Wiley-Blackwell History of American Film.
TABLE OF CONTENTS