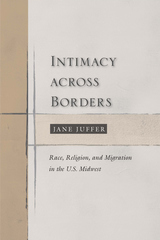 Examining how encounters produced by migration lead to intimacies-ranging from sexual, spiritual, and neighborly to hateful and violent, Jane Juffer considers the significant changes that have occurred in small towns following an influx of Latinos to the Midwest.

Intimacy across Borders situates the story of the Dutch Reformed Church in Iowa and South Africa within a larger analysis of race, religion, and globalization. Drawing on personal narrative, ethnography, and sociopolitical critique, Juffer shows how migration to rural areas can disrupt even the most thoroughly entrenched religious beliefs and transform the schools, churches, and businesses that form the heart of small-town America. Conversely, such face-to-face encounters can also generate hatred, as illustrated in the increasing number of hate crimes against Latinos and the passage of numerous anti-immigrant ordinances.

Juffer demonstrates how Latino migration to new areas of the U.S. threatens certain groups because it creates the potential for new kinds of families—mixed race, mixed legal status, and transnational—that challenge the conservative definition of community based on the racially homogeneous, coupled, citizen family.

Jane Juffer is Associate Professor of English and Feminist, Gender, and Sexuality Studies at Cornell University. She is the author of At Home with Pornography: Women, Sex, and Everyday Life and Single Mother: The Emergence of the Domestic Intellectual.