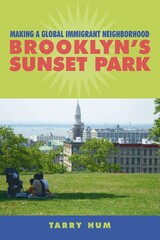 Based on more than a decade of research, Making a Global Immigrant Neighborhood charts the evolution of Sunset Park--with a densely concentrated working-poor and racially diverse immigrant population--from the late 1960s to its current status as one of New York City's most vibrant neighborhoods.

Tarry Hum shows how processes of globalization, such as shifts in low-wage labor markets and immigration patterns, shaped the neighborhood. She explains why Sunset Park's future now depends on Asian and Latino immigrant collaborations in advancing common interests in community building, civic engagement, entrepreneurialism, and sustainability planning. She shows, too, how residents' responses to urban development policies and projects and the capital represented by local institutions and banks foster community activism.

Hum pays close attention to the complex social, political, and spatial dynamics that forge a community and create new models of leadership as well as coalitions. The evolution of Sunset Park so astutely depicted in this book suggests new avenues for studying urban change and community development.