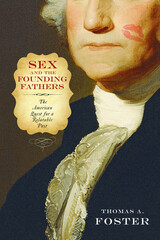 Biographers, journalists, and satirists have long used the subject of sex to define the masculine character and political authority of America's Founding Fathers. Tracing these commentaries on the Revolutionary Era's major political figures in Sex and the Founding Fathers, Thomas Foster shows how continual attempts to reveal the true character of these men instead exposes much more about Americans and American culture than about the Founders themselves.

Sex and the Founding Fathers examines the remarkable and varied assessments of the intimate lives of George Washington, Thomas Jefferson, John Adams, Benjamin Franklin, Alexander Hamilton, and Gouverneur Morris from their own time to ours. Interpretations can change radically; consider how Jefferson has been variously idealized as a chaste widower, condemned as a child molester, and recently celebrated as a multicultural hero.

Foster considers the public and private images of these generally romanticized leaders to show how each generation uses them to reshape and reinforce American civic and national identity.