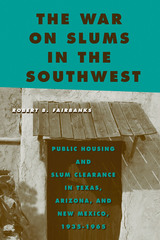 In The War on Slums in the Southwest, Robert Fairbanks provides compelling and probing case studies of economic problems and public housing plights in Albuquerque, Dallas, Houston, Phoenix and San Antonio. He provides brief histories of each city--all of which expanded dynamically between 1935 and 1965--and how they responded to slums under the Housing Acts of 1937, 1949, and 1954.

Despite being a region where conservative politics has ruled, these Southwestern cities often handled population growth, urban planning, and economic development in ways that closely followed the national account of efforts to eliminate slums and provide public housing for the needy.  The War on Slums in the Southwest therefore corrects some misconceptions about the role of slum clearance and public housing in this region as Fairbanks integrates urban policy into the larger understanding of federal and state-based housing policies.

Robert B. Fairbanks is Professor of History at the University of Texas at Arlington. He is the author of  Making Better Citizens: Housing Reform and the Community Development Strategy in Cincinnati, 1890-1960, and For the City as a Whole: Politics, Planning and the Public Interest in Dallas, 1900-1965.

1 Cities in the Southwest or Southwestern Cities?

2 The Public Housing Movement in the Southwest: Cities Battle the Slums before 1937

4 From World War II to the Housing Act of 1949: A Moratorium on Slum Clearance and Public Housing for Low-Income Citizens

5 The Solution Becomes a Problem: The Decline of the Public Housing Movement after the Housing Act of 1949

6 From Urban Redevelopment to Urban Renewal in the Southwest

Epilogue: Our War on Poverty, Not Yours on Slums

Appendix A: Social Scientists and the Changing Discourse on Slums and Poverty: A Brief Note