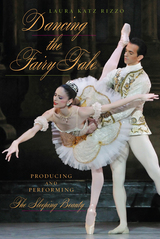 In Dancing the Fairy Tale, Laura Katz Rizzo claims that The Sleeping Beauty is both a metaphor for ballet itself, and a powerful case study for examining ballet and its production and performance. Using Marius Petipa and Pyotr Tchaikovsky's classical dance--specifically as it was staged in Philadelphia over nearly 70 years--Katz Rizzo looks at the gendered nature of women staging, coaching, and reanimating this magnificent ballet, and well as the ongoing push-pull between tradition and innovation within the art form.

Using extensive archival research, dance analysis, and American feminist theory, Dancing the Fairy Tale places women at the center of a historical narrative to reveal how the production and performance of The Sleeping Beauty in the years between 1937 and 2002 made significant contributions to the development and establishment of an American classical ballet. Katz Rizzo highlights not only what women have done not only behind the scenes, as administrators, producers, or directors of ballet companies and schools, but also as active interpreters embodying the ballet's title role.

In the process, Katz Rizzo also emphasizes the importance of regional sites outside of locations traditionally understood as central to the development of ballet in the United States.
AUTHOR BIOGRAPHY
Laura Katz Rizzo is Program Coordinator of the Bachelor of Fine Arts Program in Dance at Temple University, as well as a frequent guest speaker, choreographer, and pedagogue at universities and ballet companies across the United States.
TABLE OF CONTENTS


Acknowledgments Introduction/Prologue 1 • Women Creating Ballet: The Case of The Sleeping Beauty 2 • From Saint Petersburg to Philadelphia: Reviving and Reanimating Classicism in America 3 • Catherine Littlefield and The Sleeping Beauty’s American Premiere (1937) 4 • Aurora Streamlined and Accelerated: Barbara Weisberger and the Second U.S. Production (1965) 5 • Aurora Speaks: What Ballerinas Have to Say about The Sleeping Beauty 6 • The Power of Dance Technique and the Agency of the Ballerina  Conclusion/Curtain Call Appendix: Plot and Stage Action Notes Index