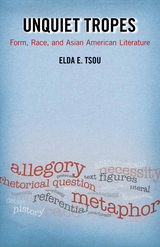 Until quite recently, Asian American literary criticism had little to do with form. Instead, the tendency was to bind the literary tradition to identity formation. For Elda Tsou, however, the distinctions of ethnic writing extend beyond such facile referential practices to incorporate form and aesthetics.

In Unquiet Tropes, Tsou reconceptualizes the literature as a set of highly particular classical rhetorical tropes including antanaclasis, rhetorical question, apophasis, catachresis, and allegory. Looking at five canonical works—Aiiieeeee!, No-No Boy, China Men, Blu’s Hanging, and Native Speaker—Tsou shows how these texts use figurative means to confront the problem of race. She also explores how traces of Asian American history live on through these figures.

Each case study in Unquiet Tropes considers a different scenario—defiance, coercion, necessity, error, and deceit—to show how literary representation from the 1950s through 1997 has responded to a specific political condition.
AUTHOR BIOGRAPHY
Elda E. Tsou is Associate Professor of English at St. John’s University in New York.
TABLE OF CONTENTS