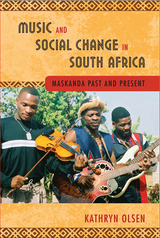 Music and Social Change in South Africa looks at contemporary maskanda-a folk musical genre distinguished by fast guitar picking and blues-style vocal intonation-against the backdrop of South Africa's history. A performance practice that emerged in the early decades of the twentieth century among Zulu migrant workers, maskanda is strongly associated with young Zulu men's experiences of repression and dislocation during imperial and, more particularly, apartheid rule.

Working closely with translated song lyrics and musical notation-and applying musical and socio-political analysis to this music and its cultural context-Olsen argues that maskanda offers insight into how the post-apartheid ideal of social transformation is experienced by those who were marginalized for most of the twentieth century.

Drawing on a decade of research, Olsen strives to demystify the Zulu part of contemporary experience in South Africa and to reveal some of the complexities of the social, economic, and political landscape of contemporary South Africa.
AUTHOR BIOGRAPHY
Kathryn Olsen is Lecturer in Ethnomusicology, Popular Music, and Related Studies at the University of KwaZulu-Natal, South Africa.
TABLE OF CONTENTS