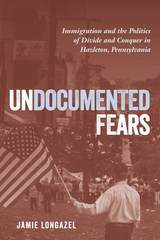 The Illegal Immigration Relief Act (IIRA), passed in the small Rustbelt city of Hazleton, Pennsylvania in 2006, was a local ordinance that laid out penalties for renting to or hiring undocumented immigrants and declared English the city’s official language. The notorious IIRA gained national prominence and kicked off a parade of local and state-level legislative initiatives designed to crack down on undocumented immigrants.

In his cogent and timely book, UndocumentedFears, Jamie Longazel uses the debate around Hazleton’s controversial ordinance as a case study that reveals the mechanics of contemporary divide and conquer politics. He shows how neoliberal ideology, misconceptions about Latina/o immigrants, and nostalgic imagery of “Small Town, America” led to a racialized account of an undocumented immigrant “invasion,” masking the real story of a city beset by large-scale loss of manufacturing jobs.

Offering an up-close look at how the local debate unfolded in the city that set off this broader trend, Undocumented Fears makes an important connection between immigration politics and the perpetuation of racial and economic inequality.

Jamie Longazel is Assistant Professor of Sociology and a Human Rights Center Research Fellow at the University of Dayton and co-author (with Benjamin Fleury-Steiner) of The Pains of Mass Imprisonment.

Introduction: Immigration and the Politics of Divide and Conquer
1. The Political Economy of Local Backlash
2. "The Straw That Broke the Camel's Back"
3. Lozano v. Hazleton and the Defense of White Innocence
4. "All We Can Do Is Show Them We Are a Respectable Bunch"
Conclusion: Recovering Authenticity