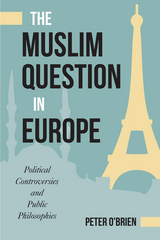 An estimated twenty million Muslims now reside in Europe, mostly as a result of large-scale postwar immigration. In The Muslim Question in Europe, Peter O’Brien challenges the popular notion that the hostilities concerning immigration—which continues to provoke debates about citizenship, headscarves, secularism, and terrorism—are a clash between “Islam and the West.” Rather, he explains, the vehement controversies surrounding European Muslims are better understood as persistent, unresolved intra-European tensions.

O’Brien contends that the best way to understand the politics of state accommodation of European Muslims is through the lens of three competing political ideologies: liberalism, nationalism, and postmodernism. These three broadly understood philosophical traditions represent the most influential normative forces in the politics of immigration in Europe today. He concludes that Muslim Europeans do not represent a monolithic anti-Western bloc within Europe. Although they vehemently disagree among themselves, it is along the same basic liberal, nationalist, and postmodern contours as non-Muslim Europeans.