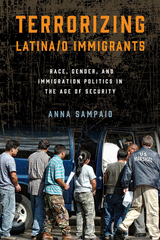 Immigration politics has been significantly altered by the advent of America’s war on terror and the proliferation of security measures. In her cogent study, Terrorizing Latina/o Immigrants, Anna Sampaio examines how these processes are racialized and gendered and how they impose inequitable burdens on Latina/o immigrants. She interrogates the rise of securitization, restrictive legislation, and the return of large-scale immigration raids and describes how these re-articulate and re-inscribe forms of racial and gender hierarchy.

Terrorizing Latina/o Immigrants demonstrates how the ascendance of America as a security state serves as a template to scrutinize, harass, and encumber immigrants while also reconfiguring citizenship. Sampaio uses intersectional analysis coupled with theoretical and empirical approaches to develop a critical framework for analyzing current immigration politics.

Sampaio provides a sustained and systematic examination of policy and enforcement shifts impacting Latinas/os. Her book concludes with an examination of immigration reform under the Obama administration, contrasting the promise of hope and change with the reality of increased detentions, deportations, and continued marginalization.

1. Reconfiguring Race and Gender in the War on Terrorism

2. Masculinist Protectionism, Racialized Demonization and the Formation of the Contemporary Security Regime in the War on Terrorism

and Roundups and their Impact on Latina/o Communities

7. The End of Terror? A New Administration and a New