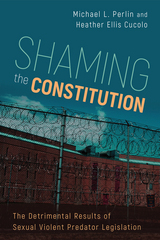 Convicted sexually violent predators are more vilified, more subject to media misrepresentation, and more likely to be denied basic human rights than any other population. Shaming the Constitution authors Michael Perlin and Heather Cucolo question the intentions of sex offender laws, offering new approaches to this most complex (and controversial) area of law and social policy.

The authors assert that sex offender laws and policies are unconstitutional and counter-productive. The legislation largely fails to add to public safety—even ruining lives for what are, in some cases, trivial infractions. Shaming the Constitution draws on law, behavioral sciences, and other disciplines to show that many of the “solutions” to penalizing sexually violent predators are “wrong,” as they create the most repressive and useless laws.

In addition to tracing the history of sex offender laws, the authors address the case of Jesse Timmendequas, whose crime begat “Megan’s Law;” the media’s role in creating a “moral panic;” recidivism statistics and treatments, as well as international human rights laws. Ultimately, they call attention to the flaws in the system so we can find solutions that contribute to public safety in ways that do not mock Constitutional principles.