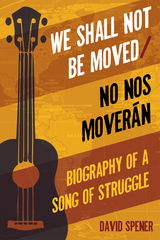 The activist anthem “We Shall Not Be Moved” expresses resolve in the face of adversity; it helps members of social movements persevere in their struggles to build a better world. The exact origins of the song are unknown, but it appears to have begun as a Protestant revival song sung by rural whites and African slaves in the southeastern United States in the early nineteenth century. The song was subsequently adopted by U.S. labor and civil rights activists, students and workers opposing the Franco dictatorship in Spain, and by Chilean supporters of that country’s socialist government in the early 1970s.

In his fascinating biography, We Shall Not Be Moved, David Spener details the history and the role the song has played in each of the movements in which it has been sung. He analyzes its dissemination, function, and meaning through a number of different sociological and anthropological lenses to explore how songs can serve as an invaluable resource to participants in movements for social change.

David Spener is chairperson of the Department of Sociology and Anthropology at Trinity University in San Antonio, Texas.  He is the co-author (with Moisés Chaparro and José Seves) of Canto de las estrellas: Un homenaje a Víctor Jara and author of Clandestine Crossings: Migrants and Coyotes on the Texas-Mexico Border. He is also the co-editor (with Gary Gereffi and Jennifer Bair) of Free Trade and Uneven Development: The North American Apparel Industry after NAFTA (Temple).

II: MOVEMENTS AND MEANINGS
7. Social Movement: A Song's Journey across Time and Space
8. Translation and Transcendence in the Travels of a Song

Conclusion: An Internationalist Culture of the Singing Left in the Twentieth Century