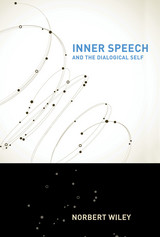 Inner speech, also known as self-talk, is distinct from ordinary language. It has several functions and structures, from everyday thinking and self-regulation to stream of consciousness and daydreaming. Inner Speech and the Dialogical Self provides a comprehensive analysis of this internal conversation that people have with themselves to think about problems, clarify goals, and guide their way through life.

Norbert Wiley shrewdly emphasizes the semiotic and dialogical features of the inner speech, rather than the biological and neurological issues. He also examines people who lack control of their inner speech—such as some autistics and many emotionally disturbed people who use trial and error rather than self-control—to show the power and effectiveness of inner speech.

Inner Speech and the Dialogical Self takes a humanistic social theorist approach to its topic. Wiley acknowledges the contributions of inner speech theorists, Lev Vygotsky and Mikhail Bakhtin, and addresses the classical pragmatism of Charles Sanders Peirce, John Dewey, William James, and George Herbert Mead to show the range and depth of this largely unexplored field.

Norbert Wiley is Emeritus Professor of Sociology at the University of Illinois, Urbana, and the author of The Semiotic Self.

TABLE OF CONTENTS
Contents
Acknowledgments
Introduction
1. What Is Inner Speech? Structure and Functions
2. When Does Inner Speech Originate in the Child?
3. Is There a Self?
4. Identity
5. Inner Speech as a Language: Saussure and Chomsky
6. Inner Speech and Agency
7. Pragmatism and the Dialogical Self
8. The Pragmatist Theory of the Self
9. Bakhtin’s Voices and Cooley’s Looking-Glass Self
10. Inner Speech Theory
Conclusion
References
Index
REQUEST ACCESSIBLE FILE