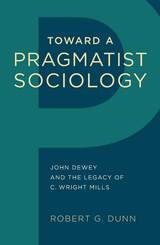 In Toward a Pragmatist Sociology, Robert Dunn explores the relationship between the ideas of philosopher and educator John Dewey and those of sociologist C. Wright Mills in order to provide a philosophical and theoretical foundation for the development of a critical and public sociology. Dunn recovers an intellectual and conceptual framework for transforming sociology into a more substantive, comprehensive, and socially useful discipline.

Toward a Pragmatist Sociology argues that Dewey and Mills shared a common vision of a relevant, critical, public sociology dedicated to the solution of societal problems. Dunn investigates the past and present state of the discipline, critiquing its dominant tendencies, and offering historical examples of alternatives to conventional sociological approaches.

By stressing the similar intellectual and moral visions of both men, Toward a Pragmatist Sociology provides an original treatment of two important American thinkers whose work offers a conception and model of a sociology with a sense of moral and political purpose and public relevance. It should liberate future sociologists and others to regard the discipline as not only a science but an intellectual, moral, and political enterprise.

Robert G. Dunn is Professor Emeritus of Sociology, California State University, East Bay. He is the author of Identifying Consumption: Subjects and Objects in Consumer Society (Temple), and Identity Crises: A Social Critique of Postmodernity.