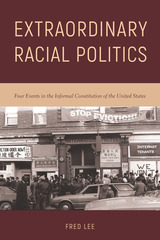 Extraordinary Racial Politics brings about an intellectual exchange between ethnic studies, which focuses on quotidian experiences and negotiations, and political theory, which emphasizes historical crises and breaks. In ethnic studies, Lee draws out the extraordinary moments in Michael Omi and Howard Winant’s as well as Charles Mills’s accounts of racial formation. In political theory, Lee considers the strengths and weaknesses of using Carl Schmitt’s and Hannah Arendt’s accounts of public constitution to study racial power.

Lee concludes that extraordinary racial politics represent both the promises of social emancipation and the perils of state power. This promise and peril characterizes our contentious racial present.

Fred Lee is an Assistant Professor of Political Science and Asian/Asian American Studies at University of Connecticut, Storrs.

TABLE OF CONTENTS
Contents
Acknowledgments
1. An Introduction into Extraordinary Racial Politics
2. Racial Re-foundations and the Rise of the Nation-State
3. Racial Removal Contracts and the Nomos of the New World
4. Racial States of Exception and the Decision on Enmity
5. Racial Counter-Publics and the Power of Judgment
6. A Reaffirmation of Extraordinary Racial Politics
Bibliography
Index
REQUEST ACCESSIBLE FILE