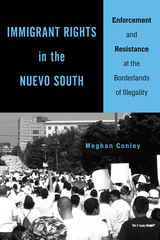 Every day, undocumented immigrants are rendered vulnerable through policies and practices that illegalize them. Moreover, they are socially constructed into dangerous criminals and taxpayer burdens who are undeserving of rights, dignity, and respect. Meghan Conley’s timely book, Immigrant Rights in the Nuevo South, seeks to expose and challenge these dehumanizing ideas and practices byexamining the connections between repression and resistance for unauthorized immigrants in communities across the American Southeast.

Conley uses on-the-ground interviews to describe fear and resistance from the perspective of those most affected by it. She shows how, for example, the Illegal Immigration Reform and Enforcement Act in Georgia prompted marches and an action that became “a day of non-compliance.” Likewise, an “enforcement lottery” that created unpredictable threats of arrest and deportation in the region mobilized immigrants to organize and demonstrate. However, as immigrant rights activists mobilize in opposition to the criminalization of undocumented people, they may unintentionally embrace stories of who deserves to be in the United States and who does not. Immigrant Rights in the Nuevo South explores these paradoxes while offering keen observations about the nature and power of Latinx resistance.

Meghan Conley is the Director of Community Partnerships in the Department of Sociology at the University of Tennessee. She is the co-author of Immigration and Population.