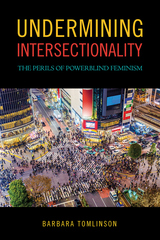 In this provocative book, esteemed scholar Barbara Tomlinson asserts that intersectionality—the idea that categories such as gender, race, and class create overlapping systemsof oppression—is consistently misinterpreted in feminist argument. Despite becoming a central theme in feminist scholarship and activism, Tomlinson believes dominant feminism has failed to fully understand the concept.

Undermining Intersectionality reveals that this apparent paradox is the result of the disturbing racial politics underlying more than two decades of widely-cited critiques of intersectionality produced by prominent white feminist scholars who have been insufficiently attentive to racial dynamics. As such, feminist critiques of intersectionality repeatedly reinforce racial hierarchies, undermining academic feminism’s supposed commitment to social justice. Tomlinson offers a persuasive analysis of the rhetorics and conventions of argument used in these critiques to demonstrate their systematic reliance on “powerblind” discursive practices.

Barbara Tomlinson is a Professor of Feminist Studies at the University of California, Santa Barbara.  She is also the author of Authors on Writing: Metaphors and Intellectual Labor, Feminism and Affect: Beyond the Trope of the Angry Feminist, and (with George Lipsitz) Insubordinate Spaces. She received the Academic Senate Distinguished Teaching Award from the University of California, Santa Barbara.