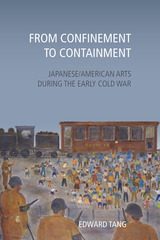 During the early part of the Cold War, Japan emerged as a model ally, and Japanese Americans were seen as a model minority. From Confinement to Containment examines the work of four Japanese and Japanese/American artists and writers during this period: the novelist Hanama Tasaki, the actor Yamaguchi Yoshiko, the painter Henry Sugimoto, and the children’s author Yoshiko Uchida. The backgrounds of the four figures reveal a mixing of nationalities, a borrowing of cultures, and a combination of domestic and overseas interests.

Edward Tang shows how the film, art, and literature made by these artists revealed to the American public the linked processes of U.S. actions at home and abroad. Their work played into—but also challenged—the postwar rehabilitated images of Japan and Japanese Americans as it focused on the history of transpacific relations such as Japanese immigration to the United States, the Asia-Pacific War, U.S. and Japanese imperialism, and the wartime confinement of Japanese Americans. From Confinement to Containment shows the relationships between larger global forces as well as how the artists and writers responded to them in both critical and compromised ways.

Edward Tang is an Associate Professor of American Studies at the University of Alabama.