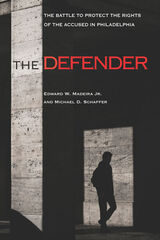 Long before the Supreme Court ruled that impoverished defendants in criminal cases have a right to free counsel, Philadelphia’s public defenders were working to ensure fair trials for all. In 1934, when penniless defendants were routinely railroaded through the courts without ever seeing a lawyer, Philadelphia attorney Francis Fisher Kane helped create the Voluntary Defender Association, supported by charity and free from political interference, to represent poor people accused of crime.

When the Supreme Court’s 1963 decision Gideonv. Wainwright mandated free counsel for indigent defendants, the Defender (as it is now known) became more essential than ever, representing at least 70 percent of those caught in the machinery of justice in the city. Its groundbreaking work in juvenile advocacy, homicide representation, death-row habeas corpus petitions, parole issues, and alternative sentencing has earned a national reputation.

In The Defender, Edward Madeira, past president of the Defender’s Board of Directors, and former Philadelphia Inquirer journalist Michael Schaffer chart the 80-plus-year history of the organization as it grew from two lawyers in 1934 to a staff of nearly 500 in 2015.

This is a compelling story about securing justice for those who need it most.

Edward W. Madeira Jr. practiced law in Philadelphia for more than 60 years and is the Retired Chair Emeritus of Pepper Hamilton. As a young lawyer, he worked as a volunteer public defender, on loan from Pepper Hamilton to the Defender Association of Philadelphia. He was a member of the Defender’s Board of Directors from 1958 to 2016 and was Chairman of the Board from 1973 to 1998.  Michael D. Schaffer held a variety of reporting and editing posts at The Philadelphia Inquirer, including Book Review Editor, before retiring from the newspaper at the end of 2014. He worked at the National Portrait Gallery of the Smithsonian Institution before becoming a journalist. He is the co-author of two books, “The Dye Is Now Cast,”: The Road to American Independence, 1774-1776 published by the Smithsonian Institution as part of its Bicentennial observance, and 1787: Inventing America: A Day-by-Day Account of the Constitutional Convention.

TABLE OF CONTENTS
Contents
Acknowledgments
Introduction: “There Is Need of a Defender”
1. The Early Years
2. The Road to Gideon
3. After Gideon
4. Lawyers Needed
5. Reorganized and Relevant
6. Tony’s Fellows Take Charge
7. Bigger, Then Better
8. Racial Diversity at the Defender
9. Pioneer Women
10. Appeals
11. Law Reform
12. Watchdog
13. Funding and Defender Pay Parity
14. Taking Stock at a Milestone
15. Greenlee Steps Up
16. The Defender Takes on Homicide
17. Treatment Courts
18. Keeping Them out of Jail
19. Juvenile Defenders and Child Advocates
20. The Federal Defender
21. The Defender in the Twenty-First Century
Epilogue
Notes
Index
REQUEST ACCESSIBLE FILE