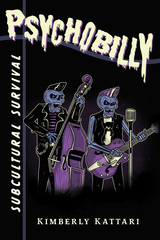 Call it punk rockabilly with science-fiction horror lyrics. The outsider musical genre known as psychobilly, which began in 1980s Britain, fuses punk, heavy metal, new wave, and shock rock with carnivalesque elements. The participants in this underground scene sport coffin tattoos and 1950s fashions. Bands such as The Meteors, Nekromantix, and Demented Are Go play with a wild energy and a fast tempo. Sometimes fake blood runs down a performer’s mouth.

Psychobilly is ethnomusicologist Kimberly Kattari’s fascinating, decade-long study of this little-known anti-mainstream genre. She provides a history and introduces readers to the core aspects of the music as she interviews passionate performers and fans. Kattari seeks to understand how psychobilly so strongly affects—and reflects—its participants’ lives and identities so strongly. She observes that it provides not only a sense of belonging but a response to feelings and experiences of socio-economic marginalization and stigmatization.

Psychobilly shows how this subculture organized around music furnishes an outlet for members to resist normative expectations and survive; they adhere to their own rules by having a good time while going through a hard time.

AUTHOR BIOGRAPHY
Kimberly Kattari is an Assistant Professor of Ethnomusicology in the Department of Performance Studies at Texas A&M University.