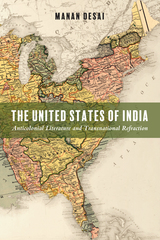 The United States of India shows how Indian and American writers in the United States played a key role in the development of anticolonial thought in the years during and immediately following the First World War. For Indians Lajpat Rai and Dhan Gopal Mukerji, and Americans Agnes Smedley, W.E.B. Du Bois, and Katherine Mayo, the social and historical landscape of America and India acted as a reflective surface. Manan Desai considers how their interactions provided a “transnational refraction”—a political optic and discursive strategy that offered ways to imagine how American history could shed light on an anticolonial Indian future.

Desai traces how various expatriate and immigrant Indians formed political movements that rallied for American support for the cause of Indian independence. These intellectuals also developed new forms of writing about subjugation in the U.S. and India. Providing an examination of race, caste, nationhood, and empire, Desai astutely examines this network of Indian and American writers and the genres and social questions that fomented solidarity across borders.