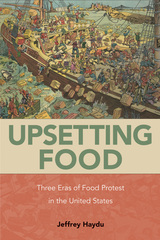 Battle lines have long been drawn over how food is produced, what food is made available to whom, and how best to protect consumers from risky or unhealthy food. Jeffrey Haydu resurrects the history of food reform and protest in Upsetting Food, showing how activists defined food problems, articulated solutions, and mobilized for change in the United States.

Haydu’s sociological history starts in the 1830s with diet reformer Sylvester Graham, who blamed alcohol and store-bought bread—signs of a commercializing urban society—for poor health and moral decline. His successors at the turn of the twentieth century rallied against impure food and pushed for women to be schooled in scientific food preparation and nutrition. Decades later, in the 1960s and ’70s, a grassroots movement for organic food battled commercial food production in favor of food grown ecologically, by small farmers, and without artificial chemicals.

Each campaign raised doubts about food safety, health, and transparency, reflecting how a capitalist system can undermine trust in food. But Haydu also considers how each movement reflects the politics, inequalities, and gender relations of its time. And he traces how outcomes of each campaign laid the groundwork for the next. The three eras thus come together as parts of a single, recurring food movement.

Jeffrey Haydu is a Professor of Sociology at the University of California, San Diego. He is the author of Citizen Employers: Business Communities and Labor in Cincinnati and San Francisco, 1870-1916, which won a Distinguished Scholarly Monograph Award from the American Sociological Association’s Labor Section and Labor History's Best Book prize for 2008. He is also the author of Making American Industry “Safe for Democracy:” Comparative Perspectives on the State and Employee Representation in the Era of World War I, and Between Craft and Class: Skilled Workers and Factory Politics in the US and Britain, 1890-1922.