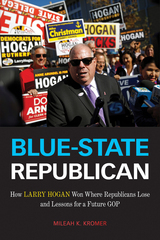 Larry Hogan is one of the most popular political figures in the United States today. The two-term Republican governor of Maryland first won his seat after upsetting a favorite of the Democratic political establishment, and then overcame the Trump-driven wave in the heartland of the #resistance to win a second term in 2018.

Blue-State Republican is the remarkable story of how his carefully messaged, pragmatic approach to governance helped build a coalition of moderate and conservative Democrats, independents, women, college-educated and Black voters and maintained his GOP base during a time of polarization and negative partisanship. Mileah Kromer takes readers inside Maryland politics to illustrate exactly how Hogan won where Republicans lose and consider whether the un-Trump Republican offers any lessons for how the GOP can win the center-right voters who continue to make up a majority of the country.

Kromer conducts interviews with key political leaders and insiders, including Hogan himself, to explain the mechanics of his political success. She also provides a cogent analysis of public opinion polls and focus groups, ultimately showing why the success of a blue-state Republican matters outside of his home state, especially as Hogan considers a 2024 Presidential run.

Mileah K. Kromer is Associate Professor of Political Science and Director of the Sarah T. Hughes Center for Politics at Goucher College. She is the founder of the Goucher College Poll, which measures the opinions of Maryland residents and voters on important policy, social, and economic issues.

REVIEWS
“Donald Trump’s Republican Party is not the only GOP. Moderate Republicans such as Maryland Governor Larry Hogan present a different model—one that used to dominate much of the electoral map but has now dwindled to a handful of states, most of them normally Democratic. Mileah Kromer does a splendid job of depicting Hogan as the blue-state Republican. Hogan’s two victories in territory usually hostile to the GOP suggest the path other Republicans can take to win in blue and competitive purple states.”—Larry J. Sabato, Director of the University of Virginia Center for Politics


“Blue-State Republican is a master class in Governor Larry Hogan’s improbable rise to power in deep-blue Maryland in 2014 and a lesson in why he may beat expectations again if he runs for president. Kromer has long been a go-to source for reporters covering Maryland politics. With this book, she establishes herself as a resource for anyone trying to understand Hogan’s place in the modern Republican Party. Time will tell if there is room in Donald Trump’s GOP for a centrist. If Hogan’s gamble pays off, then Kromer is offering us the first look at his recipe—an approach others may try to emulate. Even for those of us who had a front-row seat to Hogan’s rise, Blue-State Republican is an illuminating take on one of the most compelling and counterintuitive political stories of our time.”—John Fritze, USA Today, and former Washington correspondent for the Baltimore Sun

TABLE OF CONTENTS
Contents
Preface: The Unofficial Start
Acknowledgments
Introduction: Building a Durable Republican Majority
1. They Even Taxed the Rain
2. The Uprising and the Honeymoon
3. The Nontransferable Endorsement
4. Moderating the Trump Effect
5. Go Ahead, Call Him a Socialist
6. The Anatomy of a Landslide
7. Women and Black Voters for Hogan
Conclusion: The Future of the Hogan Coalition
Notes
References
Index
REQUEST ACCESSIBLE FILE