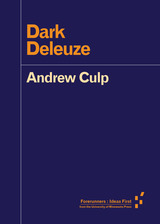 French philosopher Gilles Deleuze is known as a thinker of creation, joyous affirmation, and rhizomatic assemblages. In this short book, Andrew Culp polemically argues that this once-radical canon of joy has lost its resistance to the present. Concepts created to defeat capitalism have been recycled into business mantras that joyously affirm “Power is vertical; potential is horizontal!”

Culp recovers the Deleuze’s forgotten negativity. He unsettles the prevailing interpretation through an underground network of references to conspiracy, cruelty, the terror of the outside, and the shame of being human. Ultimately, he rekindles opposition to what is intolerable about this world.