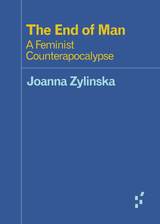 Where the Anthropocene has become linked to an apocalyptic narrative, and where this narrative carries a widespread escapist belief that salvation will come from a supernatural elsewhere, Joanna Zylinska has a different take. The End of Man rethinks the prophecy of the end of humans, interrogating the rise in populism around the world and offering an ethical vision of a “feminist counterapocalypse,” which challenges many of the masculinist and technicist solutions to our planetary crises. The book is accompanied by a short photo-film, Exit Man, which ultimately asks: If unbridled progress is no longer an option, what kinds of coexistences and collaborations do we create in its aftermath?

Joanna Zylinska is professor of new media and communications at Goldsmiths, University of London. She is a photomedia artist, curator, and author of several books.