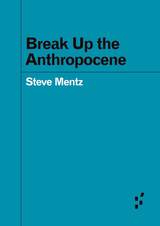 We live in a new world: the Anthropocene. The Age of Man is defined in many ways, and most dramatically through climate change, mass extinction, and human marks in the geological record. Ideas of the Anthropocene spill out from the geophysical sciences into the humanities, social sciences, the arts, and mainstream debates—but it’s hard to know what the new coinage really means. Break Up the Anthropocene argues that this age should subvert imperial masculinity and industrial conquest by opening up the plural possibilities of Anthropocene debates of resilience, adaptation, and the struggle for environmental justice.

Steve Mentz is professor of English at St. John’s University. He is the author of Shipwreck Modernity (Minnesota, 2015), At the Bottom of Shakespeare’s Ocean (2009), and Romance for Sale in Early Modern England (2006).