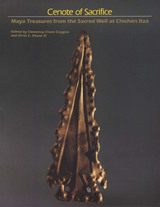 Chichén Itzá ("mouth of the well of the Itza") was one of the great centers of civilization in prehistoric America, serving between the eighth and twelfth centuries A.D. as a religious, economic, social, and political capital on the Yucatán Peninsula. Within the ancient city there were many natural wells or cenotes. One, within the ceremonial heart of the city, is an impressive natural feature with vertical limestone walls enclosing a deep pool of jade green water some eighty feet below ground level. This cenote, which gave the city its name, became a sacred shrine of Maya pilgrimage, described by one post-Conquest observer as similar to Jerusalem and Rome. Here, during the city's ascendancy and for centuries after its decline, the peoples of Yucatán consulted their gods and made ritual offerings of precious objects and living victims who were thought to receive prophecies.

Although the well was described by Bishop Diego de Landa in the late sixteenth century, its contents were not known until the early 1900s when revealed by the work of Edward H. Thompson. Conducting excavations for the Peabody Museum of Harvard University, Thompson recovered almost thirty thousand artifacts, most ceremonially broken and many beautifully preserved by burial in the deep silt at the bottom of the well. The materials were sent to the Peabody Museum, where they remained, unexhibited, for over seventy years.

In 1984, for the first time, nearly three hundred objects of gold, jade, copper, pottery, wood, copal, textile, and other materials from the collection were gathered into a traveling interpretive exhibition. No other archaeological exhibition had previously given this glimpse into Maya ritual life because no other collection had objects such as those found in the Sacred Cenote. Moreover, the objects from the Cenote come from throughout Mesoamerica and lower Central America, representing many artistic traditions. The exhibit and this, its accompanying catalog, marked the first time all of the different kinds of offerings have ever been displayed together, and the first time many have been published.

Essays by Gordon R. Willey and Linnea H. Wren place the Cenote of Sacrifice and the great Maya city of Chichén Itzá within the larger context of Maya archaeology and history. The catalog entries, written by Clemency Chase Coggins, describe the objects displayed in the traveling exhibition. Some entries are brief descriptive statements; others develop short scholarly themes bearing on the function and interpretation of specific objects. Coggins' introductory essay describes how the objects were collected by Thompson and how the exhibition collection has been studied to reveal the periods of Cenote ritual and the changing practices of offering to the Sacred Cenote.