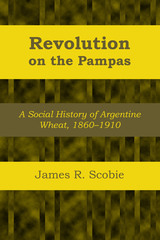 On the Argentine pampas, between the years 1860 and 1910, a dramatic social and agricultural revolution took place. The haunts of wild cattle, native peoples, and gauchos were transformed into cultivated fields and rich pastures. A land that had produced only scrawny sheep and cattle became one of the world’s leading exporters of wheat, corn, beef, mutton, and wool. A country that had had only a sparse and scattered Spanish and mestizo population now boasted a metropolis of one and a half million, and a national population of eight million people, nearly a third of whom were born in Europe. These were significant changes, and wheat growing played a major role in all of them. This study traces the development of the Argentine wheat zone, focusing on the part wheat played in forming the Argentina of today.

James R. Scobie begins his account with the first settlers who colonized Santa Fe in the 1850s and shows how they and thousands of other European immigrants converted this vast grassland into a world breadbasket. He explains why these small farmer-owners soon gave way to tenant farmers, and how crop farming developed primarily as servant to the predominant sheep and cattle interests. He expands on several factors responsible for this evolvement: the elimination of indigenous threat, the coming of the railroad, the agricultural policy—or lack of policy—of the Argentine government, and the urban orientation of the Argentine people.

The railroads, by suppressing the building of other roads through the pampas, had the effect of isolating the wheatgrowers. By making the products of the pampas available to world markets, the railroads opened up new trade, which helped the growth of cities tremendously; but this very prosperity pushed the cost of land far beyond the wheatgrower’s ability to buy it. The result was a pampas without settlers, a frontier filled with migrant sharecroppers and tenant farmers, a land exploited but not possessed. Transiency as well as isolation became the common denominators of these families, who were forced to move every few years to make way for more valued tenants—sheep and cattle. They left behind them no schools, no churches, no roads, no villages. Immigrants came to labor but not to sink their roots in the pampas.

Without sentimentality but with understanding and compassion, Scobie explores every facet of the lives of these laborers who created Argentina’s agricultural greatness. His examination of Argentina’s broad policies toward land, immigration, and tariffs shows that the national government had little lasting or effective interest in the country’s agricultural development. In a social sense, the thousands of immigrants who toiled the pampas were looked upon as the wild cattle or fertile soil—blessings which neither needed nor warranted official attention. Scobie’s conclusion is that Argentina got better than it deserved.

AUTHOR BIOGRAPHY
James R. Scobie (1929–1981) was Professor of History at the University of California at San Diego.
TABLE OF CONTENTS