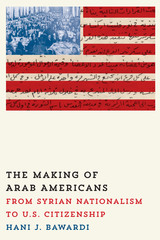 While conventional wisdom points to the Arab-Israeli War of 1967 as the gateway for the founding of the first Arab American national political organization, such advocacy in fact began with the Syrian nationalist movement, which emerged from immigration trends at the turn of the last century. Bringing this long-neglected history to life, The Making of Arab Americans overturns the notion of an Arab population that was too diverse to share common goals. Tracing the forgotten histories of the Free Syria Society, the New Syria Party, the Arab National League, and the Institute of Arab American Affairs, the book restores a timely aspect of our understanding of an area (then called Syria) that comprises modern-day Syria, Lebanon, Jordan, Israel, and Palestine. Hani Bawardi examines the numerous Arab American political advocacy organizations that thrived before World War I, showing how they influenced Syrian and Arab nationalism. He further offers an in-depth analysis exploring how World War II helped introduce a new Arab American identity as priorities shifted and the quest for assimilation intensified. In addition, the book enriches our understanding of the years leading to the Cold War by tracing both the Arab National League’s transition to the Institute of Arab American Affairs and new campaigns to enhance mutual understanding between the United States and the Middle East. Illustrated with a wealth of previously unpublished photographs and manuscripts, The Making of Arab Americans provides crucial insight for contemporary dialogues.
AUTHOR BIOGRAPHY
HANI J. BAWARDI is Assistant Professor of History at the University of Michigan–Dearborn, where he has contributed to the development of the university’s first minor in Arab American studies.
TABLE OF CONTENTS


AcknowledgmentsNote on Arabic Terms and NamesIntroduction1. Arab Populations under Ottoman Rule: A Background2. The Syrian Nationalism of the Mahjar Press3. Soldiers for Syria before World War I: The Free Syria Society4. The Syria Idea and the New Syria Party5. The Mandate Years and the Diaspora: The Arab National League and a Historical Context for Arab American Narrative6. The Arab National League and the Emergence of Arab American Identity7. The Institute of Arab American Affairs: Arab Americans and the New World OrderConclusionNotesBibliographyIndex