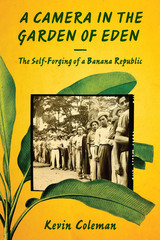 In the early twentieth century, the Boston-based United Fruit Company controlled the production, distribution, and marketing of bananas, the most widely consumed fresh fruit in North America. So great was the company’s power that it challenged the sovereignty of the Latin American and Caribbean countries in which it operated, giving rise to the notion of company-dominated “banana republics.”

In A Camera in the Garden of Eden, Kevin Coleman argues that the “banana republic” was an imperial constellation of images and practices that was checked and contested by ordinary Central Americans. Drawing on a trove of images from four enormous visual archives and a wealth of internal company memos, literary works, immigration records, and declassified US government telegrams, Coleman explores how banana plantation workers, women, and peasants used photography to forge new ways of being while also visually asserting their rights as citizens. He tells a dramatic story of the founding of the Honduran town of El Progreso, where the United Fruit Company had one of its main divisional offices, the rise of the company now known as Chiquita, and a sixty-nine day strike in which banana workers declared their independence from neocolonial domination. In telling this story, Coleman develops a new set of conceptual tools and methods for using images to open up fresh understandings of the past, offering a model that is applicable far beyond this pathfinding study.

AUTHOR BIOGRAPHY
Kevin Coleman is an assistant professor of history at the University of Toronto Mississauga.
TABLE OF CONTENTS