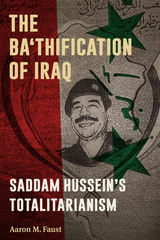 Saddam Hussein ruled Iraq as a dictator for nearly a quarter century before the fall of his regime in 2003. Using the Ba’th party as his organ of meta-control, he built a broad base of support throughout Iraqi state and society. Why did millions participate in his government, parrot his propaganda, and otherwise support his regime when doing so often required betraying their families, communities, and beliefs? Why did the “Husseini Ba’thist” system prove so durable through uprisings, two wars, and United Nations sanctions? Drawing from a wealth of documents discovered at the Ba’th party’s central headquarters in Baghdad following the US-led invasion in 2003, The Ba’thification of Iraq analyzes how Hussein and the party inculcated loyalty in the population. Through a grand strategy of “Ba?thification,” Faust argues that Hussein mixed classic totalitarian means with distinctly Iraqi methods to transform state, social, and cultural institutions into Ba?thist entities, and the public and private choices Iraqis made into tests of their political loyalty. Focusing not only on ways in which Iraqis obeyed, but also how they resisted, and using comparative examples from Hitler’s Germany and Stalin’s Russia, The Ba’thification of Iraq explores fundamental questions about the roles that ideology and culture, institutions and administrative practices, and rewards and punishments play in any political system.
AUTHOR BIOGRAPHY
AARON M. FAUSTArlington, VirginiaFaust holds a PhD in Middle East History and Statecraft from Boston University. He has lived and traveled widely in the Middle East, including in Syria from 2008 to 2009 as a Fulbright Scholar and National Security Education Program Boren Fellow. He currently works at the US Department of State.
TABLE OF CONTENTS


List of AbbreviationsChronologyPrefaceAcknowledgmentsPart I. Introduction Chapter One. The Inculcation of Loyalty Chapter Two. The Origins of Husseini Ba?thist TotalitarianismPart II. Ideology Chapter Three. Husseini Ba?thism Chapter Four. CulturalizationPart III. Organization Chapter Five. The Leader and the Party Chapter Six. The Party State Chapter Seven. The Ba?thification of SocietyPart IV. Terror and Enticement Chapter Eight. Terror Chapter Nine. EnticementConclusion. A Total StrategyPostscript. The Legacy of Ba?thificationAppendix 1. A Work Plan for Coordination between the Party and Mass Organizations in the Field of the Ba?thification of SocietyAppendix 2. Special Regulations for How to Deal with the Relatives of Criminals Convicted for Political CrimesNotesGlossary of Arabic TermsBibliographyIndex