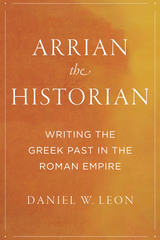 During the first centuries of the Roman Empire, Greek intellectuals wrote a great many texts modeled on the dialect and literature of Classical Athens, some 500 years prior. Among the most successful of these literary figures were sophists, whose highly influential display oratory has been the prevailing focus of scholarship on Roman Greece over the past fifty years. Often overlooked are the period’s historians, who spurned sophistic oral performance in favor of written accounts. One such author is Arrian of Nicomedia. Daniel W. Leon examines the works of Arrian to show how the era's historians responded to their sophistic peers’ claims of authority and played a crucial role in theorizing the past at a time when knowledge of history was central to defining Greek cultural identity. Best known for his history of Alexander the Great, Arrian articulated a methodical approach to the study of the past and a notion of historical progress that established a continuous line of human activity leading to his present and imparting moral and political lessons. Using Arrian as a case study in Greek historiography, Leon demonstrates how the genre functioned during the Imperial Period and what it brings to the study of the Roman world in the second century.
AUTHOR BIOGRAPHY
Daniel W. Leon is an assistant professor of classics at the University of Illinois at Urbana-Champaign.
TABLE OF CONTENTS