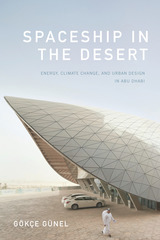 In 2006 Abu Dhabi launched an ambitious project to construct the world’s first zero-carbon city: Masdar City. In Spaceship in the Desert Gökçe Günel examines the development and construction of Masdar City's renewable energy and clean technology infrastructures, providing an illuminating portrait of an international group of engineers, designers, and students who attempted to build a post-oil future in Abu Dhabi. While many of Masdar's initiatives—such as developing a new energy currency and a driverless rapid transit network—have stalled or not met expectations, Günel analyzes how these initiatives contributed to rendering the future a thinly disguised version of the fossil-fueled present. Spaceship in the Desert tells the story of Masdar, at once a “utopia” sponsored by the Emirati government, and a well-resourced company involving different actors who participated in the project, each with their own agendas and desires.
AUTHOR BIOGRAPHY
Gökçe Günel is Assistant Professor in the School of Middle Eastern and North African Studies at the University of Arizona.
REVIEWS
"Spaceship in the Desert is the fascinating story of a 'zero-carbon eco-city' that demonstrates the stark difference between vision and reality. . . . Günel’s first-hand reportage is insightful and objective."

"The book is not only a rich ethnographic description of Masdar in all of its intricacies, but also a larger reflection on how global risks are framed according to the beliefs and situated actions of various interest groups."

"The global climate crisis is serious, but Günel shows that our attempts to tackle it are less so. . . . Our contemporary moral mess, from the GCC to Massachusetts, can be seen all too clearly through the pages of Günel’s account."

"Spaceship in the Desert is a timely contribution to a growing field of anthropological scholarship on energy. . . . This book has the potential to attract readers from across the social sciences, not just within anthropology. The richness of ethnographic detail drawn in connection with the work of key thinkers may satisfy some readers."

"Compelling and thought-provoking. . . .  Günel encourages us as academics and as persons to rethink, renegotiate, and recreate our imaginations of the future through climate change technologies that do not preserve the status quo, but rather, alter it in the present."

“[Günel’s] brilliant ethnography of Masdar reminds us of the limits of the third pilot of Spaceship Earth—the market.... Gu¨nel’s study also shows how the scope of climate change demands administrative bodies beyond corporations and states.”