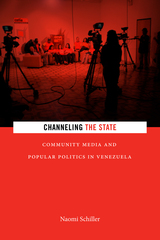 Venezuela's most prominent community television station, Catia TVe, was launched in 2000 by activists from the barrios of Caracas. Run on the principle that state resources should serve as a weapon of the poor to advance revolutionary social change, the station covered everything from Hugo Chávez’s speeches to barrio residents' complaints about bureaucratic mismanagement. In Channeling the State, Naomi Schiller explores how and why Catia TVe's founders embraced alliances with Venezuelan state officials and institutions. Drawing on long-term ethnographic research among the station's participants, Schiller shows how community television production created unique openings for Caracas's urban poor to embrace the state as a collective process with transformative potential. Rather than an unchangeable entity built for the exercise of elite power, the state emerges in Schiller's analysis as an uneven, variable process and a contentious terrain where institutions are continuously made and remade. In Venezuela under Chávez, media activists from poor communities did not assert their autonomy from the state but rather forged ties with the middle class to question whose state they were constructing and who it represented.
AUTHOR BIOGRAPHY
Naomi Schiller is Assistant Professor of Anthropology at Brooklyn College, City University of New York.
REVIEWS
"This is a rich, timely and compelling piece of work that contributes significantly to debates about the state, press freedom, community media, class, gender and urban social movements. It will be of great value both to those interested specifically in Venezuela and those concerned with these themes in broader terms."

"In this engaging book . . . Schiller is able to buttress critiques of top-down approaches to state power and state-building, showing readers how most interactions and relationships on the ground cannot be neatly categorized as either from above or from below."

"Schiller’s book is a thorough description of how class and gender affect active citizenship and how these factors create constant conflict in everyday practices of meaning making."

"This text is important because it so carefully recorded the explanatory principles of Catia TVe and the impact of media technology in the hands of the community desperate to affect state process and policy. . . . This study is quite timely, considering the events that took place in Venezuela in March 2019. It will help future researchers to see whether the theory of community TV and its ethos had a long-lasting impact on the people those stations were designed to serve."

"This book joins a significant body of anthropological and theoretical work on the state and society in Venezuela. . . . This book is a highly useful aid to that project."

"Schiller’s book boldly unthinks commonsensical categories in the liberal episteme, namely 'the state' and 'society.' Doing so casts the popular classes not as victims of Western imperialism or of Chavista hegemony, but as activated agents who debated in what kind of state would be made. It is an important entry in the emergent field of Chavismo media studies."

"We must read Naomi Schiller's Channeling the State, a compelling study of community media in Venezuela, with a sense of urgency.… The book offers a deep understanding of complex political and social processes occurring within social movements that established alliances with the state. What makes it so unique is the engrossing narrative that, benefiting from ethnographic detail, presents a tangible approach to difficult conceptual debates on state formation, populism, and subalternity."

"While Schiller considers statecraft and the role of poor people rather than the medium of media per se, I'd encourage anyone thinking about media as a channel for social justice to take up Channeling the State. I further recommend this book to anyone considering the relations between the marginalized and the state and the specifics of Venezuelan politics at a particular moment in time."

"A fascinating behind-the-scenes account that draws on months of ethnographic fieldwork. . . . The book’s framing of CatiaTVe as a legacy of New Latin American Cinema makes it an essential reference for researchers of film and participatory film-making."