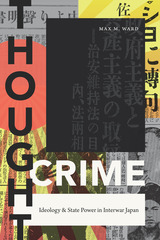 In Thought Crime Max M. Ward explores the Japanese state's efforts to suppress political radicalism in the 1920s and 1930s. Ward traces the evolution of an antiradical law called the Peace Preservation Law, from its initial application to suppress communism and anticolonial nationalism—what authorities deemed thought crime—to its expansion into an elaborate system to reform and ideologically convert thousands of thought criminals throughout the Japanese Empire. To enforce the law, the government enlisted a number of nonstate actors, who included monks, family members, and community leaders. Throughout, Ward illuminates the complex processes through which the law articulated imperial ideology and how this ideology was transformed and disseminated through the law's application over its twenty-year history. In so doing, he shows how the Peace Preservation Law provides a window into understanding how modern states develop ideological apparatuses to subject their respective populations.
AUTHOR BIOGRAPHY
Max M. Ward is Associate Professor of History at Middlebury College and coeditor of Confronting Capital and Empire: Rethinking Kyoto School Philosophy.
REVIEWS
"[Ward] has provided his readers with a well-written account of how between 1920 and the 1930s the Japanese nation endeavored to suppress political radicalism."

"Thought Crime offers a lucid reflection on theories of power and the modern state while refusing to fetishize the particularities of the Japanese case."

"Thought Crime sets itself apart from past studies of the Peace Preservation Law by developing a theory of imperial ideology that focuses on its effects on those in proximity to it: bureaucrats, thought criminals, and those who were mobilized to rehabilitate them."

"Thought Crime is a thought-provoking, intelligent, and necessary book.… It is a must-read for serious students of modern Japanese political and intellectual history."

"Rigorous and creative explorations of the multiple modalities of state power are much needed in the study of the cultural and social history of modern Japan, and in that respect Thought Crime makes an invaluable contribution to the field."

"This book is nicely written and well-organized, and the author makes excellent use of Japanese-language primary sources. Overall, this is an outstanding piece of research. It makes a substantial contribution to existing works on this topic and is recommended for use in graduate seminars on modern Japanese history."

"This analysis is a valuable service in increasing our knowledge of the rise of Japanese militarism and the coming of WWII in Asa.… Recommended. Graduate students through faculty."


Preface: Policing Ideological Threats, Then and Now  ix
Acknowledgments  xv
Introduction. The Ghost in the Machine: Emperor System Ideology and the Peace Preservation Law Apparatus  1
1. Kokutai and the Aporias of Imperial Sovereignty: The Passage of the Peace Preservation Law in 1925  21
2. Transcriptions of Power: Repression and Rehabilitation in the Early Peace Preservation Law Apparatus, 1925-1933  49
3. Apparatuses of Subjection: The Rehabilitation of Thought Criminals in the Early 1930s  77
4. Nurturing the Ideological Avowal: Toward the Codification of Tenkō in 1936 123
5. The Ideology of Conversion: Tenkō on the Eve of Total War  145
Epilogue. The Legacies of the Thought Rehabilitation System in Postwar Japan  179
Notes  185
Bibliography  261
Index  281