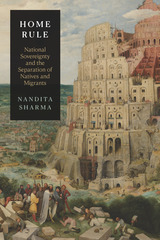 In Home Rule Nandita Sharma traces the historical formation and political separation of Natives and Migrants from the nineteenth century to the present to theorize the portrayal of Migrants as “colonial invaders.” The imperial-state category of Native, initially a mark of colonized status, has been revitalized in what Sharma terms the Postcolonial New World Order of nation-states. Under postcolonial rule, claims to autochthony—being the Native “people of a place”—are mobilized to define true national belonging. Consequently, Migrants—the quintessential “people out of place”—increasingly face exclusion, expulsion, or even extermination. This turn to autochthony has led to a hardening of nationalism(s). Criteria for political membership have shrunk, immigration controls have intensified, all while practices of expropriation and exploitation have expanded. Such politics exemplify the postcolonial politics of national sovereignty, a politics that Sharma sees as containing our dreams of decolonization. Home Rule rejects nationalisms and calls for the dissolution of the ruling categories of Native and Migrant so we can build a common, worldly place where our fundamental liberty to stay and move is realized.
AUTHOR BIOGRAPHY
Nandita Sharma is Professor of Sociology at the University of Hawai‘i at Mānoa and author of Home Economics: Nationalism and the Making of ‘"Migrant Workers" in Canada.
REVIEWS
-- Marcus Rediker, University of Pittsburgh


-- Nicholas De Genova, editor of The Borders of “Europe”: Autonomy of Migration, Tactics of Bordering


Acknowledgments  ix
1. Home Rule: The National Politics of Separation  1
2. The Imperial Government of Mobility and Stasis  36
3. The National Government of Mobility and Stasis  62
4. The Jealousy of Nations: Globalizing National Constraints on Human Mobility  90
5. The Postcolonial New World Order and the Containment of Decolonization  117
6. Developing the Postcolonial New World Order  142
7. Global Lockdown: Postcolonial Expansion of National Citizenship and Immigration Controls  163
8. National Autochthonies and the Making of Postcolonial National-Natives  205
9. Postseparation: Struggles for a Decolonized Commons  268
Notes  285
Bibliography  299
Index 347