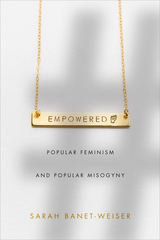 In Empowered Sarah Banet-Weiser examines the deeply entwined relationship between popular feminism and popular misogyny as it plays out in advertising, online and multimedia platforms, and nonprofit and commercial campaigns. Examining feminist discourses that emphasize self-confidence, body positivity, and individual achievement alongside violent misogynist phenomena such as revenge porn, toxic geek masculinity, and men's rights movements, Banet-Weiser traces how popular feminism and popular misogyny are co-constituted. From Black Girls Code and the Always #LikeAGirl campaign to GamerGate and the 2016 presidential election, Banet-Weiser shows how popular feminism is met with a misogynistic backlash of mass harassment, assault, and institutional neglect. In so doing, she contends that popular feminism's problematic commitment to visibility limits its potential and collective power.
AUTHOR BIOGRAPHY
Sarah Banet-Weiser is Professor of Media and Communications at the London School of Economics and author of Kids Rule! Nickelodeon and Consumer Citizenship, also published by Duke University Press, and AuthenticTM: The Politics of Ambivalence in Brand Culture.
REVIEWS
-- Elisabeth Woronzoff Popmatters