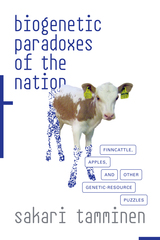 In 1992, the Convention on Biological Diversity (CBD), signed by over 160 countries and hailed as the key symbol of a common vision for saving Earth's biodiversity, set forth three primary mandates: preserving biodiversity, using biodiversity components sustainably, and enabling economic benefit-sharing. The CBD—which gave signatory countries the ability to claim sovereignty over nonhuman genetic resources native to each nation—defined biodiversity through a politics of nationhood in ways that commodified genetic resources. In Biogenetic Paradoxes of the Nation Sakari Tamminen traces the ways in which the CBD's seemingly compatible yet ultimately paradox-ridden aims became manifest in efforts to create, conserve, and capitalize on distinct animal and plant species. In using Finland as a case study with which to understand the worldwide efforts to convert species into manifestations of national identity, Tamminen shows how the CBD's policies contribute less to biodiversity conservation than to smoothing the way for frictionless operation of biotechnologically assisted circuits of the global bioeconomy. Tamminen demonstrates how an intimate look at the high-level politics and technical processes of defining national genetic resources powerfully illuminates the limits of anthropocentric biopolitical theory.
AUTHOR BIOGRAPHY
Sakari Tamminen is Adjunct Professor in the Faculty of Social Sciences at the University of Helsinki, coauthor of Recoding Life: Information and the Biopolitical, and coeditor of Bio-Objects: Life in the Twenty-First Century.
REVIEWS
-- Stefan Helmreich, author of Sounding the Limits of Life: Essays in the Anthropology of Biology and Beyond


List of Abbreviations  vii
Acknowledgments  ix
Introduction. The New Biopolitics of Nature and the Nature of (Mis)Stakes  1
1. Finncattle: Biowealth as National Life  38
2. Alexander and the (Re)Birth of Nation: Apple Trees' Genetic Fingerprinting and the Making of a Molecular Nationhood  84
3. Stilled Life: Animal Gene Banks and New Infrastructures of Life  127
4. Experimental Administration: Genetic Sovereignty and the Institutional (Bio)Politics of Nonhuman Nationhood  173
Conclusion. Biogenetic Paradoxes of the Nation  210
Notes  223
References  237
Index  259