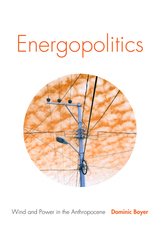 Between 2009 and 2013 Cymene Howe and Dominic Boyer conducted fieldwork in Mexico's Isthmus of Tehuantepec to examine the political, social, and ecological dimensions of moving from fossil fuels to wind power. Their work manifested itself as a new ethnographic form: the duograph—a combination of two single-authored books that draw on shared fieldsites, archives, and encounters that can be productively read together, yet can also stand alone in their analytic ambitions.

In his volume, Energopolitics, Boyer examines the politics of wind power and how it is shaped by myriad factors, from the legacies of settler colonialism and indigenous resistance to state bureaucracy and corporate investment. Drawing on interviews with activists, campesinos, engineers, bureaucrats, politicians, and bankers, Boyer outlines the fundamental impact of energy and fuel on political power. Boyer also demonstrates how large conceptual frameworks cannot adequately explain the fraught and uniquely complicated conditions on the isthmus, illustrating the need to resist narratives of anthropocenic universalism and to attend to local particularities.
AUTHOR BIOGRAPHY
Dominic Boyer is Professor of Anthropology at Rice University, Founding Director of the Center for Energy and Environmental Research in the Human Sciences (CENHS), and author of The Life Informatic: Newsmaking in the Digital Era. Energopolitics is one half of the duograph Wind and Power in the Anthropocene; Ecologics, by Cymene Howe, is the other half.
REVIEWS
-- L. L. Johnson Choice